“No podemos fallar” Raúl Tamudo / "We can not fail" Raul Tamudo 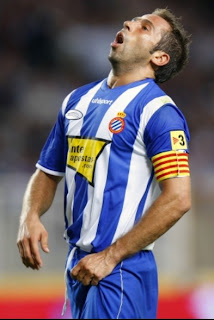 Tamudo is encouraged to address the momentous nine days we h todo. El capitán, acostumbrado a ofrecer su mejor rendimiento en las segundas vueltas y marcar goles decisivos, no se obsesiona con el gol y sólo ave left. Like all the staff, will give everything. The captain, used to offer their best performance in the second round and decisive score goals, not obsessed with the goal and only thinks of salvation. The fans know that if you are in top form in this final stretch of the season his goals can be worth its weight in gold and closer to salvation. The schedule provides reason for optimism, and now just need to luck, which has turned its back on too many meetings, ally with us once and for all 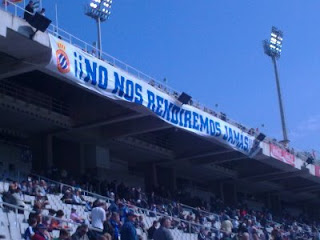 .
-The team has returned with renewed energy and ready to Navata in the final stretch of the season where he plays everything. How afrontáis those nine games left?
With responsibility and the confidence of knowing that we are ready for a final stretch that will be very complicated. We know what we expect and hope that for the first time this season, have a point and hopefully we can win two or three games straight.

It is true that we must be party to party but you believe that improving the team together for the next rival to us: Numancia, Racing and Sporting are grounds for optimism?
-Be always optimistic. We have passed that stage with the big game with very good options and all the parties, however, for one reason or another, we could only win one. Now they are fighting more or less direct and we can not fail, but it also guarantees us nothing.

-Although salvation is six points in the absence of nine days, having 5 games in Montjuïc, we hold more hope for achieving the objective?
We have to factor that and want that. Be very complicated, but it is also true that the fans are with us and be a factor.

-The fans can not score goals, but is helping to achieve them. Your answer may be a key to exit positions fall?
-I said yes. People are turning and demonstrates that maintaining a loyalty and an extraordinary love. We will put all our effort to get the victories we need and expect fans to follow us because we will need.

Lately, the team has made great games but has lacked a little luck to get good results. The football is a little unfair to Espanyol?
Luis Garcia has said several times in press conferences that football can not be so unjust to Espanyol. It is something that everyone inside the dressing room, we noticed the same. Our effort, work and play are not getting the reward it deserves. The fate has given us too many games back in this league and just hope that it will turn at once.

In the 30-day of the season 96-97, almost the same as this, made his debut in First and mark your first goal before the Hercules, which was somewhat important for salvation, and then dial in to the Sarriá Oviedo. Will be crucial to keep your goals in the Primera?
I never think about these issues at first. It is true that I was lucky enough to make important goals throughout all these years, but now I am not obsessed with it. I would prefer not to mark a goal or more and save the team, to 15 in ten days and are not used to avoid relegation.

Accustomed to-deliver your best performance in the second round, get in position to return to repeat the previous seasons?
Typically, this has happened to me, minus last year. I am well, eager and anxious to make my job so that the team can benefit.

-You 've lost two and a half months of competition because of a muscle tear, does this make you come over to the cooler end of the season?
-No. This is not so. It is not a mathematical equation. Injuries will always make at all levels, physical and psychic. I'm fine. I'm in good shape and I think I am coaching at all others. The only thing we lack, I repeat, is converted into scoring chances we are creating. As soon as we get, everything will change.

- How can we explain the lack of goals in a plan like this in which there are always players who have scored a number of so important?
There is no explanation. Front, we know that sooner or later mark. When a patch is in eclipse what others are doing. What had never happened before is that all at once, we had a very negative streak. That really has no logical basis.

No marks from November 2 to Osasuna. I imagine that you must be eager to return to sing goal, right?
-I said that I do not obsess. The goals will come. Sure. I prefer to continue holding those of my colleagues and the team will stay.

-You've already experienced two salvations in the last day: one with Luis Fernandez to the Murcia and the other against Real Sociedad with Lotina. Will this year is more difficult than on those occasions?
It is more difficult because the conditions seem so. We are by far and much time, but it is also true that Espanyol have been able to link successfully. Last year, for example, during the first round, I think we were 17 days without losing, and that guarantees the quality of this template.

-The last day is against Malaga in Montjuïc. Do you see another game like those living with the stands packed with Spanish?
-I would prefer not to see me in that situation. Hopefully we get to that party with all in favor, to follow in First and mathematically that this meeting was a celebration for all followers. Finally another game would be too much tension.
interview www.rcdespanyol.com
Publicado por Lord Serer en 22:03 No hay comentarios: